For her forthcoming solo exhibition Bronwyn Hill presents two co-existing series of representational works. A collection of figurative pieces depict shadows of nature cast over human forms, the patterns and reflected shapes of leaves, flowers and branches suggesting a connectedness to the subjects' surroundings. The environment itself is left unseen, allowing viewers to focus on a relationship with nature and the sensation of sun and fresh air on skin. The composition of her model's body language suggesting feelings of melancholy and anxiety, symptomatic of a technology-saturated world where a disconnect from nature has become even more amplified after a year of restrictions on movement and time spent outdoors.

It’s often said that artists are the best record keepers of memories and stories. And to understand Bronwyn Hill’s body of work is no exception. Flick open the pages of her sketchbook and you will observe moments in time that capture the essence, the philosophies and the experiences of her life. Describing her work as “deeply personal”, Hill’s painting acts as a form of chronicling, of processing and diarising periods in her life that encapsulate what it means to be human; moments of self-worth, grief and melancholy.

Eighteen months on from the start of 2020 and the pre-pandemic world seems almost otherworldly. Most can recall a fast-paced existence, of darting to and from meetings and engagements as if on auto-pilot. Life speeding by in a blur of colour and haze. Pairing back the layers of modern excess that had accumulated over time gave us all a chance to be more reflective on life and what was missing. It was within this milieu that Disconnect was conceived.

Viewed in two parts, Disconnect combines Hill’s self-portraits, imbued with her propensity to stage props and layer overt personal symbolism, and figurative works dotted with her philosophies on Mother Nature, connection and survival.

In Abscission, Hill sets the scene for a symbolic narrative examining her feelings on social pressures placed on pregnancy and motherhood. Abscission is the term used to describe the natural detachment of parts of a plant, typically dead leaves and ripe fruit. In this work we see the artist sat in a fetal position, cocooned by a blood red womb shaped chair, undoubtedly cutting the blossoming flower from an orchid with sharp scissors. A ripe pomegranate sits cracked open on the table, its jewel-like seeds spilling across the glass table top; a poignant symbol of fertility and power. The props for this stage are set as an act of choice, and one the artist wants us to know is her decision.

As an appropriation of Edward Hopper’s 1952 work Morning Sun, Blue Sky Thinking is pensive, haunting and isolated. Inspired by Hopper, an artist who made solitude his life’s work, Hill captures the loneliness and seclusion of our New World. A world where streets are deserted, shops sit empty and people peer like caged animals out their windows. This is a world that Hill is no stranger to. As an artist who spends a lot of her time in solitude, she understands the gaze through which Hopper’s world exists. Whether seeking out a spot in the serenity of the bush or looking out the window and observing nature, it’s as if her figure is asking us to embrace the stillness and just listen. To listen to birdsong sail through the breeze, to marvel at the star speckled night sky, to relish in the calm moments of the space in between.

In the same way that Blue Sky Thinking highlights the melancholy of isolation, her shadowed paintings have their own disturbing remoteness. It’s as if Hill has tattooed these docile bodies with their own appropriations of the natural world. A reminder of what we have lost through our disconnection of nature and to ourselves.

Disconnect parallels a connection to the yearning for something more. For connection, for happiness, for the vivacity of life and all it can offer us. In a time where our connection to nature and to ourselves is more disconnected than ever, Hill reminds us that our history and our future is linked to the survival of connection; both to ourselves and to the world around us.

Bronwyn Hill is a Brisbane based painter whose practice predominantly focuses on portraiture and figurative representation. Recognized for her sensual photo-real oil paintings, full of poetic narratives and gentle observation,  her work often exploring ideas of self-analysis and introspection within moments of personal solitude. Imbued with a sense of stillness and contemplation, Hill’s use of light and shadow and it’s emotional impact is a recurring feature of her images, as is her subtle use of colour and exquisite depiction of natural forms.

Hill has been involved in many exhibition showcases throughout Australia, including portrait prizes such as the Shirley Hannan National Portrait Award and the Portia Geach Memorial Award. Hill completed a Diploma of Fine Arts in 2011. 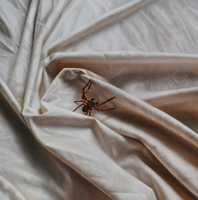