COASTAL
Essay by Melanie Caple, BArts(FA) MArts 2018
Artists have long been attracted to the beauty and the perils of the coast - think of Turner and his white cliffs, Casper David Friedrich’s brooding seaside fogs or Arthur Streeton’s idyllic, quintessentially Australian sandy coves. Full of light, movement, and the changeable qualities of the elements, the concept of ‘ocean’, and the landscapes that lie at its edges, have long acted as vehicles upon which to contemplate the human condition, and our place within nature.

For this exhibition, a group of artists have been brought together to respond to this coastal theme. Though diverse in representation, all of these artworks omit the physical depiction of human form within the landscape. The shoreline appears at times foreboding or calm, the colours brooding or kaleidoscopic, and each piece allows us to fall into them, the only spectator to their horizons.

Chelsea Gustafsson acutely draws focus, however, to the human impact upon our oceans. Depicting items foraged from the Victorian coastline, Gustafsson creates what could be viewed as ‘portraits’ of the ground underfoot,  presenting an ‘intimate experience of walking along the beach, where attention is drawn to surveying the microcosm within the shoreline: sand, seaweed, pebbles, marine life, fishing lines, plastics and other foreign litter.’ As David Attenborough highlighted in his recent series Blue Planet 2, each year eight hundred million tonnes of plastic is dumped into our oceans. It is in this environmental climate that artists like Gustafsson play an important role in championing change.

Sophia Szilagyi has a more romantic take on the wild waters that encircle us. Her work ‘Breaking’ illustrates the dark underbelly of the ocean, the roaring waves and swelling tides that inspire awe but also rationally fear. In contrast is her piece ‘Waiting,’ where calm, vast waters lead out to a smooth horizon. Here her choice of title draws attention to the foreboding clouds that will soon thrust the ocean into an unpredictable state, where once again we’ll be swallowed up by the foamy waves.

The sheer vastness of a coastline is something hard to illustrate, yet Caroline Rannersberger captures a sense of space both sweeping and psychological, where the movement of the tide and the veils of clouds appear and then dissipate across each panel of her canvas. With a limited colour palette and a studio that looks out to the water surrounding her home of Bruny Island, the artist paints a ceaselessly shifting landscape.

As artist Ken Smith notes in the statement to his coastal paintings of the Mornington Peninsula, the American-British poet Anne Stevenson wrote that, 'the sea is as near as we come to another world' and he himself states that ‘the coast, the littoral where land and water meet, is the place where this sensation starts to become apparent.’

Each of the artworks present within Coastal allows for an entry point to this sort of other-worldly landscape, a place that is both familiar and foreign, precious and perilous.

William Breen
Breen's coastal pieces pay homage to the area south east of Melbourne, in particular Mt Martha and Blairgowrie. Seething with holiday makers in the summertime, Breen experiences these beaches in the off season, when the sand and the sky are his alone to absorb. In each of these works, he captures the soul of an experience in a way that could never be achieved by taking a snapshot on a smartphone. Where lenses would struggle capturing the light, subtle colours and shifting forms, Breen does them justice through paint and brush. Excerpt from essay by Melanie Caple, 2017

Pete Denison
I spend a lot of solitary time on North West Island in Queensland where seagulls are my sole companions. Uninvited guests at meal times, the gulls reveal their crafty personalities in their constant quest for food. In our relationship, I am the one who denies them food and also the one who finally surrenders to the helpless look of hunger in their eyes. It’s a relentless game – and one that is both amusing and annoying!

In “Swoop”, I try to capture a beach scene that is familiar to all - the frantic dash of seagulls for hot chips. As the two large birds wrestle over a single chip, a smaller gull watches warily from the side lines for his moment. Birds have been a constant in my work over three decades. Fascinated by ravens and magpies when living in New Mexico, I carved their free-standing forms and incorporated them into my “Sculptured Worlds” series.

Pete Denison is a guest artist to FLG.

Chelsea Gustafsson
These still life arrangements of marine debris are a contrast to traditional seascapes that the coast inspires. My experience of coastal living involves both an awareness of the entirety of its view: sky, horizon, ocean, cliffs, reef and beach. And also the intimate experience of walking along the beach where attention is drawn to surveying the microcosm within the shoreline: sand, seaweed, pebbles, marine life, fishing lines, plastics and other foreign litter. An immersion in the details of organic and inorganic matter occurs whilst wandering and beach combing and it is almost indiscernible as to whether some objects are natural or man made. This microcosm on the shoreline is an epitome of the modern world where organic and inorganic have amalgamated and the removal of one is replaced with the next swell and rising tide.

Having previously worked in film and television and as a graphic designer Gustafsson’s twelve years working as a professional artist has seen her exhibit both nationally and internationally, and be announced as a finalist in the Metro 5 Art Award, the John Leslie Art Award, the ANL Maritime Art Prize and a winner of Linden Postcard Show in 2010

Belynda Henry
Inspired by the Australian landscape of the NSW Central Coast, Belynda Henry’s practice showcases her adventurous and passionate love of painting. Through her vivacious use of colour Henry beautifully depicts the textured rolling hills, pristine lakes and pastel skies of her surroundings. Belynda Henry first exhibited with FLG in 2016.

Henry has exhibited widely in both solo and group exhibitions. She has been a finalist in the Paddington Art Prize (2017), the Wynne (2000, 2013, 2015, 2016), the Archibald Portrait Prize (2016), the Gosford Art Prize (2006 & 2003), the Tattersalls Art Prize (2003) and the Mosman Art Prize (2003) among others. Her work has been featured in numerous publications and blogs including Art Collector, Vogue Living, FETE, Country Style Magazine, The Design Files, Daily Imprint, The Age, Sydney Morning Herald, Interiors Addict, In a Designer Home, EST, Home Beautiful, Real Living, Inside Out, Belle, House and Garden, The Home, Queensland Home, The Block Magazine and Style Curator.

Amber-rose Hulme
Cool and still the waters rest, contained and separated by jagged barriers. Peaceful next to the rough, untamed rocks which separate them from the turbulent waters of their origin. At any moment the waves may breach these rocky defenses, returning the water to the unruly ocean, how long this relative peace will last is unknown. We hold our breath in anticipation, missing the peace and calm this temporary respite offers us as we look out for what is to come. Take a breath.

Working predominantly on linen panels, Rannersberger’s large-scale landscapes reference both her Tasmanian surrounds and her German heritage. Caroline is an intuitive painter who directly responds to her environment, referencing the rhizomatic model of the Deleuzian philosophy and it’s potential to open up new way of ‘seeing’ paintings.

Rannerberger's work is held in the collections of the National Gallery of Australia, The Museum and Art Gallery of the Northern Territory (MAGNT), and Artbank. She has been a finalist in the Bay of Fires Art Award (2014), the Glover Prize (2013 & 2011), Hutchins Prize (2013), the Tattersalls Art Prize (2012), and the City of Albany Art Prize (2011), and has in the last five years been a finalist in the Fleurieu Art Prize, the ABN Amro Award, Fremantle Print Award, & the Alice Prize.

Ken Smith
The poet Anne Stevenson has written that: “The sea is as near as we come to another world” and the coast, the littoral where land and water meet is the place where this sensation starts to become apparent. My paintings in this exhibition all attempt to evoke this tension between what is known and what is unknown; between the tangible in close proximity, and the indeterminate and mysterious distance. Fundamental to all these images is the region of the offing; the enigmatic zone where sea and air visibly touch on the horizon.

Peter James Smith
Humans have stood on the shoreline and looked out to sea throughout the history of civilisation. This gaze has been one of longing; of figuring; of watching; of calculating. Peter James Smith's recent landscapes have embraced this line of sight across history through an overlaid textual presence of thoughts and dotted lines, diagrams, graffiti and scribble. In recent works in particular the dotted line has been integral to the representation of this line of sight because of its insistence on a tenuous connection between lineal endpoints; between geometry and abstract thought; between the cusp of now and the forgotten folds of history.

In particular Longitude, 2018, charts the shipwreck of Sir Cloudisley Shovell's British fleet on the Scilly Isles off Cornwall and the consequent search by the Board of Longitude for a time keeping device so that mariners could determine their locations at sea. (Hence the construction of the chronometer carried by James Cook on his Pacific voyages to  Australia and New Zealand.) The painting depicts the stalwart Bishop Rock Lighthouse dwarfed by the sea, which rose and fell quite fearfully on the day of the artist's visit.

Of Twilight's Repeated Measure, 2018, has inscribed the mathematics for measuring the radius of the earth by looking out to sea over Port Philip Bay in Melbourne. The top limb of the sun is seen setting by an observer in a lying down position and then (usually about 8 seconds later) by the same observer in a standing position. Here the dotted line not only refers to the clear geometry of the calculation, but also celebrates a mathematical history of deductive reasoning and human inventiveness.

Sophia Szilagyi
When I sit down to work on a seascape or landscape, it is my primary goal to create an image of the way it FELT to be in that particular landscape. For this reason my works are sometimes called emotionscapes rather than landscapes.  The vast, endless quality of the ocean, waves and sky always fill me with feelings of awe, isolation, and pure joy.

For many years Sophia Szilagyi’s work has traversed land, sky and seascapes, inventing a universe that appears plausible yet is largely make-believe. Through digital printmaking she skillfully merges
numerous images to create a distinctive sense of otherworldliness in her work that is entirely unique.

Szilagyi has exhibited widely over the last twenty years. She has been a finalist in the Darebin Art Prize, was the winner of the Banyule City Art Award in 2011, has been the recipient of a prestigious Janet Holmes A Court Artists Grant and completed residencies at the ARt Vault in Mildura and with Turner Gallery in Perth. Her work is housed in the collections of Artbank, the City of Yarra, Print Council of Australia, State Library of Victoria and the Geelong Gallery just to name a few. 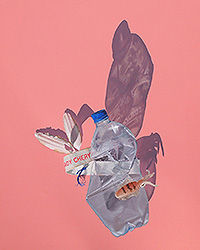