Michael Gromm’s relationship to his medium speaks of an open two-way process of making and unmaking, of the physical actions of painting and the emotional impacts of looking. These are tremendously flamboyant images, joyful and brash in their exuberance. Paired with the somewhat allegorical, sometimes nonsensical titles he bestows upon each one, they also speak of the absurd and superfluous acts, decisions and spontaneities that drive much of our human endeavour. 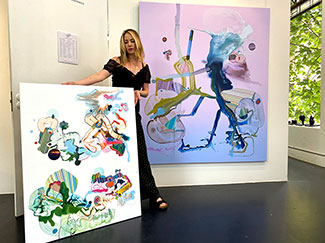 Gromm’s large fluid paintings seek to suspend the viewer in a state of preternatural ‘nowness’ creating moments of visual and mental spaciousness, capable of encouraging creativity, reflection and calm within an increasingly complex and rapidly changing world.

I have an innate fascination with what is not known, and enjoy those moments when my eyes perceive things incorrectly. Those moments, usually out of the corner of my eye, when a few shapes or movements blend together to trigger a response from my consciousness. My works delve into the unknown and form unplanned, unending puzzles; a game of charades for both me and the viewer.  However, among the puzzles there exists an overarching awareness that sets the direction of my works, and strikes a fundamental balance between letting the paint do as it wants, and making it do as it is told.
Artist Statement - Michael Gromm

Over the last decade, Michael Gromm has been refining his painterly vision, creating images featuring expressive swirls of colour anchored by figurative elements executed with illustrational accuracy. In the artist statement accompanying an earlier exhibition, Gromm acknowledged that he enjoys ‘those moments when my eyes perceive things incorrectly … when a few shapes or movements blend together to trigger a response from my consciousness.’  It is useful to remember that when encountering unexpected associations between different objects or images, the human eye seeks association whilst the brain seeks comprehension. Just because one reacts to the other and comes up with an interpretation doesn’t necessarily mean it’s all now a closed loop. The contradiction of their association is enough to generate each viewer’s own unique explanation, one filtered through gut reaction, a person’s previous experience of art, which magazine has been recently read, which overseas journey completed…. a myriad of possible association, none more correct than the other. Through this prism of (mis)understanding, Gromm’s become works which oscillate with meaning when given half a chance.
Extract from essay by Andrew Gaynor 2019

Michael Gromm completed his Bachelor of Fine Art degree in 2002 at the Univeristy of Ballarat. He has been a finalist in The Geelong Contemporary Art Prize (2016), The Scope Galleries Art Prize (2012), The Metro Gallery Art Prize (2010), The Fletcher Jones Contemporary Art Prize (2008) and was announced the winner of the David Pratt Drawing Award (2001). In 2015 Gromm was selected to exhibit in FLG’s Exploration Exhibition for emerging and unsigned artists. He was awarded the FLG Emerging Artist Award in 2015 and held his first solo exhibition with FLG in 2016. His works are held in collections in Singapore, USA and across Australia. 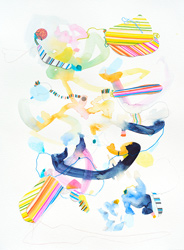 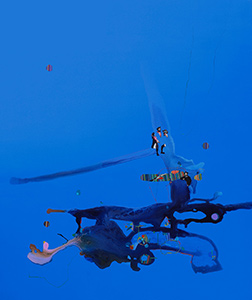