Air operates elusively, always surrounding us yet only noticeably present when it is absent. The ambitious machine drawings of Canberra based Jay Kochel seek to articulate the imperceptible by inverting notions of solidity and immateriality. Inspired by Japanese concepts of meditation and perception, Kochel creates ‘air studies’ that extract, map and translate both the physical world and our sensory experience of it.

Working through a process of technical reinterpretation, air-filled sculptural skins replicating solid forms are transformed into flattened mesh models via a process of 3 dimensional scanning and digital pen plotting. The results are a breathtaking series of complex, ethereal studies in line and space.

The mechanical drawing is a plotter (modified vinyl cutter), using a white pigment marker to draw the mesh of 3D scanned objects. These objects were mylar balloons that Jay made during a residency at the Kyoto Arts Centre exploring ideas of impermanence and air as a material for creating form. Attached is an image of the orignal object to give you an idea, suspended in the Japanese school room that was his studio for 3 months. The objects were around 1-2 metres and printed slightly less than actual size. The 3D scanner he has is portable and attaches to an iPad. The 3D data is then edited and maniulated into a 2D mesh, or net, that provides a drawing path for the plotter.

Jay Kochel was the winner of the 2017 FLG Exploration Award for Emerging Artists. Based in Canberra Kochel completed his Doctorate in Philosophy (Visual Art) at the Australian National University, School of Art, in 2013. In 2014 he was awarded an Arts ACT Project Funding Grant and an Asialink Residency to the Kyoto Art Center, Japan. Recently, his research has focussed on scent and methods of representing the unseen. This research was part of a Vice Chancellor’s Visiting Artist Fellowship at the ANU College of Physical and Mathematical Sciences and the Research School of Chemistry. Kochel’s work has a multidisciplinary approach to his art practice and research methodology.

Kochel has won several awards including joint winner of the M16 Artspace Drawing Prize (2016); recipient of the Neil Roberts Award (2008) and the Anthony Forge Prize for Anthropology (2004). Prior to completing an undergraduate degree in sculpture and interactive media he studied a combined Bachelor of Anthropology and Law in 1996. Kochel’s doctoral studies focused on the relationship between fetish, magic and contemporary art. The majority of his fieldwork was conducted at the Pitt Rivers Museum, Oxford and the Musée du quai Branly, Paris, where he researched the artefactual history of fetishism.

Jay Kochel has brilliantly created an augmented reality app that allows the viewer to experience his artwork in their three dimensional forms. It is from these forms that Kochel creates this two dimensional mechanical drawings.
With the artwork springing to life on the screen, this allows us to fully appreciate the technical skill and rendering that goes into creating these incredibly detailed works.

All images remain copyright of the artist. If you intend on sharing these images on social media, please make sure to credit the artist, Jay Kochel, and FLG.
@theforlornoptimist
@flinderslanegallery 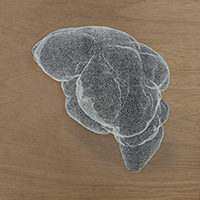