Delving into the hidden depths of the subconscious, Undercurrents explores the dark, curious and peculiar worlds of creative possibility. Featuring new works created by both FLG and guest artists, each brings to this exhibition a personal revelation about the nature of selfhood, and the deep-seated need for connection with others. Representations of sexuality, morality and inner desire sit alongside allegorical images of metaphysical and mystical longing. In equal part beautiful, uncanny and surprising each artist renders visible the endless originality of the human psyche.

This work is part of a broader investigation of the Posthuman condition and acknowledges contemporary anxiety about the planet that our children will inherit. Informed by my recent journey to Osorezan in Northern Japan, it presents the ‘eternal youth’ as a metaphor for the loss of our natural world, as well as our innocence and humanity.

Translated as ‘Fear Mountain’, Osorezan in Buddhist Japanese mythology, is believed to be a gateway to the underworld.  Situated on the shores of a caldera – a lake within an active volcano – it is a charred landscape of blasted rocks, scalding pools of bubbling mud and stinking sulphurous gases. Stone effigies dressed in babies’ bibs punctuate the desolation, for the souls of lost children linger here, too young to have accrued adequate karma to depart this hellish place. Accumulations of stones are heaped into cairns, placed so by anguished parents as offerings to the gods, in return for their children’s passage into the afterlife.

This poignant place of sublime harshness, has informed my hypothetical and metaphorical future; the world of the Posthuman. Here, the earth has been stripped of its foliage, and humans have become gods, genetically manipulated and ageless, and yet beholden to the omnipotent voice of our digital devices. These youths – preternatural clones of perfection – are suspended uneasily within a purgatorial landscape; connected but also disconnected.

‘The shadow is the invisible saurian tail that man still drags behind him. Carefully amputated, it becomes the healing serpent of the mysteries.’ (Carl Jung)

The concept of the shadow is central to Pearce’s artistic practice, reflects her fascination with the mysterious, creative and layered concept of the human psychological shadow or shadow aspect. Her sometimes naïve and/or flowing figurative ‘shadow’ manifestations appear as wall installations, sculptural work or on shiny reflective surfaces. The amorphous repeated shapes can loom large whilst possessing an inscrutable but comforting presence, like a bewitching tattoo or ancient stamp that has seeped silently into the conscious world. It is said that whilst the shadow within us can remain unconscious there is also gold in the shadow and special gifts are bestowed upon us for bringing our shadow into light. Pearce uses glossy or mirrored surfaces to allow us to simultaneously observe the creative shapes of her shadow imaginings whilst being unable to avoid our own reflection. She is referencing the unconscious projection of our individual or collective shadow as a constant existential happening. Influenced by Jungian theory and much written work on the subject of the psychological shadow, Pearce visually picks apart the idea of a shadow aspect with boldly graphic artwork.

For Pedlar photography is a medium of expressing the frustration of identity struggles and the dysmorphic attitudes we have when viewing our own physiques. Their work manages to project innocence within the photography of human forms so often tinged with sexuality. The intrigue felt when viewing these images distracts us from jumping to assign a gender, resulting in a refreshing appreciation of the marvellous vessel in which we carry our consciousness.

Through the abstraction of the human form, Myles Pedlar aims to give authentic, unconventional expression to contemporary issues of gender, sex and identity. These key themes are explored through the warping, abstraction and contortion of the photographic image and in turn draw attention to the emotional and physical complexities of gender identity.
Extract from essay by Kezia Parkins 2017

Still emerging in their practice, Pedlar graduated with a Bachelor of Photography from RMIT University in 2015. Myles won the Photography Prize at Brunswick Street Gallery in 2015, and was the winner of the Southern Coast Art Prize in both 2013 and 2012. In 2015 their work was featured on the cover of Catalyst (issue 5, volume 7) RMIT's Student Magazine for their gender issue.

Pedlar was selected to exhibit in Flinders Lane Gallery's Exploration 16 Exhibition for emerging and unsigned artists in June 2016.

A few years ago I stayed in a hotel in Munich. Across the lane way at the rear of the building stood an apartment building. Each evening residents of the apartments would arrive home and begin preparing meals. As I watched I became aware of the cinematic qualities of the scenes I was seeing. This series of paintings permits the viewer to engage in incidental voyeurism as they observe people in their private worlds. A figure in a window at night will always attract attention. Lit from within, the images are framed by darkness, making the subjects even more interesting.

Tighe has exhibited annually throughout Sydney and Melbourne since 1996 with both group and solo exhibitions. Tighe was a finalist in the Eutick Still Life Award (2016 & 2015) and in 2015 was also a finalist in the Tattersalls Club Art Prize, the Gallipolli Art Prize and the NAB Flanagan Art Prize. In 2014 he was a finalist in the prestigious Archibald Prize with his portrait of Emma Ayres, and in 2013 was selected to hang in the Salon de Refuses, S.H.Erwin Gallery, Sydney. Tighe also hung in a group exhibition titled ‘Spirit of Football’ held at the National Gallery of Victoria in 2004.

For Undercurrents Melbourne artist Ryan Pola has chosen to turn inward, inspired by the proverbial undercurrent of his own experiences, ambitions and emotions. In these works Pola documents the overcoming of pain (heartbreak, turmoil, and loss) through the introspective process of self-reflective drawing. The works all carry a weight, a personal heaviness, that through their creation alleviated anger and confusion.

While Pola doesn’t often portray himself within his work, for such an introspective series he included in his display representations and personifications of himself. Each work alludes to a sense of dualityand each documents a process, a nature, and an ability to cope with the sometimes unrecognised or acknowledged proponents of the psyche. They are a duality of conversation against one’s self and of a pleading self-love for one’s self that is cyclical and refracts over and over. The twin characters that result represent an understanding that our ability to self-destruct lies very close to our ability to shine.

Pola recently completed a Bachelor of Visual Arts while continuing a Bachelor of Education (Secondary) at Monash University. He works daily from his home studio using drawing as his main means of creative expression.

‘Gazing’ is a new series of works by Melbourne artist Michael Simms that explore the distortion of gender, identity, sexuality and selfhood through the proliferation of digital technologies.

While the benefits of the digital revolution have been exponential, the temptation to seek validation (whether it be social, sexual, emotional or economic) via online platforms has created an unprecedented assortment of social issues. Combining a background in  classical art training with studies in psychology, sociology and film, Simms’ has developed a body of work that contributes to a broader discussion around digital media and identity through the use of three key components –figures, surreal environments, and nightscapes.

Where her drapery and cloudy fluids merge, airy space is rendered visible, indicating a slippage between the worlds of the real and the spectral. Dresses defy gravity and fall away into immateriality, as do the objects within her broody still lifes. Using artificial flowers, skulls adorned with floral arrangements coalesce with vaporous clouds, suggesting a spirit disembarking or some poisonous gas rising. Reminiscent of the allegorical paintings of the 16th century Dutch School, these images aim to demonstrate the fleeting nature of life, and the inescapable nearness of death.  Excerpt of essay by Phe Luxford, 2018

Cowell’s images connect the viewer with both the real and imagined rites of feminine transition and the creative realm of dream and fantasy. Themes of impermanence also emerge via the seemingly endless, inky blackness that envelops her forms. Inspired by period costume and the hidden meanings often associated with women’s status, life experiences and how they shroud themselves, ideas of mortality, youth and decay also surface. 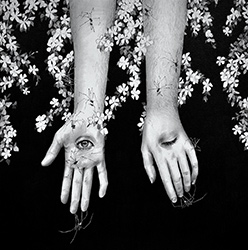