FLG is delighted to announce the forthcoming release of Kathryn Ryan’s monograph.

Celebrating the practice of this acclaimed landscape painter, the book spans two decades of Ryan’s art practice and offers both collectors and admirers of her practice the opportunity to gain a deeper insight into the evolution and motivations behind her serene images. Including selected essays, reviews and statements by the artist, as well as a comprehensive survey of past works, this monograph is a timely celebration of a quietly driven artist. Limited edition of 100, full colour, printed on 300gsm satin art paper and PUR bound.

Copies of the publication are available for purchase via our Bigcartel store or contact the gallery directly.

Each limited-edition book is signed and numbered by the artist. $44 AUD GST inclusive

For over two decades Kathryn Ryan has been documenting the landscape of south west Victoria, most particularly the trees that mark the region’s farmlands. She has shrouded the landscape in a moody light evoking a sense of ethereal ambiguity. But even as she brings us the familiar, Ryan continues to bring something new. Her focus shifts, her techniques grow, and her themes continue to evolve. She gives us reason to keep exploring this landscape with her, to know it ever more intimately and ever more profoundly.

To this end, the works in South West Coast include not only the trademark cypress trees but also the region’s dramatic coastline. There are oils and there are charcoals. There is shadow and there is definition.

Ryan’s cypress pine landscapes have defined her body of work, but there were signs of the ocean landscapes in her earliest post-graduate exhibitions and the coastline now takes its place alongside the farm landscapes. This expanded view is a response to Ryan’s return to Australia after many years in the United Arab Emirates (UAE). Setting up her studio in Warrnambool she was once again surrounded by the dairy country and coastline of her early years. She has always been moved by the drama of the region’s coast, but on her return to Australia she found herself ‘completely awestruck’ by what she saw. She immediately began on a series of drawings in charcoal, and later began the series of paintings now seen in South West Coast.

Given its prominence in the Australian psyche, the coast was perhaps an obvious place for Ryan to shift her gaze as she returned to the Australian landscape, but she has not focussed on its sparkling clichés or its place as our summer playground. Instead we see the cliffs and the gorges, the rocky formations and the energy of the tides, some drawn in charcoal, others painted in oil.

The charcoal drawings retain Ryan’s distinctive sense of mood. Looking out over the apostles it is quite clearly daytime, but in a sideways glance the light on the water might as easily be the reflection of the moon as it is the sun. The painted landscapes of Loch Ard Gorge, however, are less ethereal than the other works. This is in part due to the light, which, although more subdued than a mid-day summer sun, is nonetheless a contrast to the twilight and nightfall shades of the cypress pine landscapes. Technique is also important here. Where the cypresses are painted in several layers over many months, each layer left to dry before another is added, the coastal landscapes and the water in particular have been painted more spontaneously. The layers are still built up, but through a wet-on-wet technique. This gives the Loch Ard works the greater sense of movement and urgency that the tides demand.

Despite the differences, the ocean landscapes share unmistakable links with the cypress landscapes, extending Ryan’s themes of permanence shaped by impermanence and fragility tempered with strength. The trees and the cliffs give the landscape a sense of strength, of longevity and permanence. But anyone walking through this landscape knows that there is a temporariness as well and that the next time they are here—tomorrow or next year—the sun will be out, or the wind will be still, the fog will lift, and the tide will come in. Even the trees and the cliffs, as strong as they are, will change. Trees will drop their limbs and eventually fall. The cliffs will be eroded by the tides, and none of us knows when another apostle will crumble. This juxtaposition of the simultaneous strength and fragility of our external environment is a reflection of our internal experience. Our moods, our emotions, our experiences are constantly shifting, and we must find within ourselves a solidity and a strength to counter these fluctuations.

Similarly, Ryan’s meditations on solitude are further developed. The trees, although large and numerous, are often represented as singular. Even when in clusters, each one is defined, its separate-ness clear. The apostles, once a part of the coastline’s cliffs, now stand as distinct, discrete formations and as with the trees, the space around and between them is as important as any fixed object we can see. But we do not feel the desolation of loneliness. Instead, there is a palpable sense of deep connection. As we look into Loch Ard Gorge the walls of the gorge surround us, but the waters beyond the break are still in view and the clouds above are a reminder of the vastness of the natural world. Being alone is not something to be feared. It is an opportunity for quiet, meditative contemplation.

There is a clear line from Ryan’s earliest works to here. From her first exhibitions, Ryan has spoken of her deeply personal relationship with the landscapes she paints. These are places she knows. In the catalogue of Here and Now (2008), Ashley Crawford noted that ‘one could no doubt find’ each of the trees that Ryan had painted, ‘…but simultaneously there is a universality to Ryan’s trees that takes them beyond their rural roots.’ Writing about Ryan’s work in New Romantics: Darkness and Light in Australian Art, Simon Gregg (2011) said: ‘…there is clearly something deeper at stake, manifest in the absence of life and the promotion of feeling over observation. Her work, though outwardly secular, suggests an engagement with sensations that can only be described as spiritual.’ These observations are as true of the works we see today as they were back then.

But South West Coast also brings together features of Ryan’s most recent evolutionary shifts as an artist. Perhaps one of the most significant of these shifts was during her time as a resident of the UAE, first in Abu Dhabi and then in Dubai. Having been used to the distant views and the broad horizons of Victoria’s south-west, the contrast with life in downtown Dubai was stark. Working towards exhibitions from photographs in her apartment-based studio Ryan felt herself becoming less and less connected to the Australian landscapes she was painting and knew that in order to be true to herself and her work she would need to respond to her current environment. Her focus shifted towards the UAE. This was a difficult process as she was city-bound, and her feelings of dislocation intensified. But Ryan learnt to look at her environment differently, finding beauty in the details of the frangipani trees and the ubiquitous bougainvillea. Her long-held fascination with the light was vital, bringing into focus the shadows cast by the flowers against the compound walls and by the Arabic lanterns hanging on balconies and in foyers. With materials expensive and difficult to locate in the UAE, it became the perfect time to return to her early love of drawings and particularly of charcoals. The result was Shadow and Light (2013).

Shadow and Light (2013) might have seemed a sharp departure from her previous exhibitions, but the focus on detail has informed her work ever since and the wide-angled viewpoint now takes in the details as well. There are still hints of the ghost-like representations of the cypresses we saw in A Quiet Place (2001), Panmure Paddocks (2003) and The South West (2005), but the silhouettes of the trees we see in South West Coast today are more detailed and their singularity is more defined than at any other time. This is not done at the expense of the ambiguity or evocation of mood. Rather, the detail draws us further in, inviting a more intimate and more knowing relationship.

This is not the first time Ryan has represented the cypress landscapes alongside other landscapes, and in her New Works (2010) and Winter Landscapes (2011) the cypress trees were complemented by the snow-covered landscapes inspired by a trip to England and Scotland, a reprieve from the UAE’s desert heat. In those expansive landscapes, the snow was a blanket just as the fog had been, hiding the landscape’s detail but highlighting its power. The rocky crags of those winter landscapes echo the natural features of the coastal landscapes in this current exhibition and make us wonder at the coincidence of its Scottish name, Loch Ard Gorge.

Ryan has spoken of the intricate relationship between her childhood on the farm, her spirituality, and her life’s work as an artist. While the influence on her subject is obvious, the influence on her practice might be less so. But growing up in a large family on a farm during the 1970s and 1980s was better training for an artist than might immediately be obvious. In her childhood there was routine, ritual and order. Her family’s livelihood depended on a work ethic of discipline and follow-through. Farmers, like artists, take a risk with their production, living on seasonal incomes. And then there is the isolation not only of living out of town, but of working alone. Through her work, Ryan reassures us that there is nothing to be feared from being alone. We are always a part of something much bigger than ourselves.

Of course, there have been artistic relationships too and Ryan is influenced by the Renaissance and Impressionist artists, playing with light, aspiring to find balance and harmony. Asked about her contemporary influences she speaks of Bill Henson and particularly of the mood, the light and the drama of his photography. She speaks also of Frank Auerbach, known as a painter, but who also worked in charcoal, drawing portraits through a process of constant reworking which gives his work energy and motion. It is this constant reworking that draws Ryan to his work, the idea of pushing a work further and further, each reworking instilling another layer of emotion. ‘I start with an intention,’ she says, ‘and I keep working until I’ve achieved it.’

South West Coast is a substantial addition to Ryan’s body of work. For Ryan’s work in charcoals, it is a consolidation and a demonstration of her ongoing commitment to exploring the potential of the medium. For her work in oils it is also a consolidation, but it is an extension too. Of landscapes that are new, but also immediately recognisable. Together, these works show us an artist who remains true to the core of her intentions but with each new exhibition seeks new ways to give these intentions a visual language. South West Coast shows us an artist who pushes herself, her work and us, but at the same time offers us a place and a time for contemplation. And from this place and this time, we are able to draw strength and make peace with the uncertainties of our own internal landscapes.

Ryan's works have been purchased by the curators and advisers for the Macquarie Group Collection, the Warrnambool Art Gallery Collection and Artbank. Most recently her work has been acquired by the Parliament House Collection and the RACV Collection. 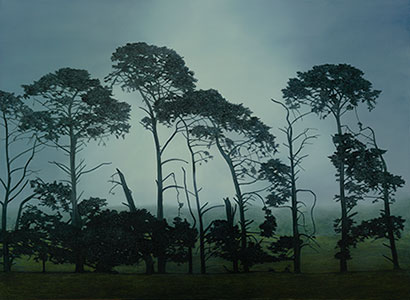