Much have I travell'd in the realms of gold
And many goodly states and kingdoms seen;
Round many western islands have I been 1

The practice of Peter James Smith explores the symbiotic coming together of diametric realms. Art, poetry, science and mathematics swirl around in a complex crucible of human history, blending and bleeding into one another to form new conceptions of place. In Smith’s latest series of paintings, collages and assemblages, humanity’s insatiable quest for progress and knowledge is pitched against the unflinching backdrop of sublime scenery, creating a dialogue between the transient and the transcendent; between the mortality of man and the enduring landscape. Scrawled with poetry, truncated notes, digits and formulae that seem to flicker before our eyes, the works evoke kinesis; a sense of rapid scientific invention and intervention. And yet a stillness blankets these sweeping vistas as the artist contemplates that which is colossal, immovable and eternal.

Drawing from his time as a professional mathematician, yet equally inspired by his love of poetry, Smith bores into the documented travels of generations past from a post-Enlightenment vantage point in an attempt to piece together the composite power of journeys and the traces that they leave behind. Many of the works in ‘Round Many Western Islands’ reference John Keats’ sonnet On First Looking into Chapman’s Homer (1816), which tells of the author's astonishment while reading the ancient works of Homer under the 1616 translation by the Elizabethan playwright George Chapman. ‘The lines were absorbed by me as a child’, reflects Smith, who connects the poem to the discovery of histories and places, scientific and cultural knowledge.

Siphoning inspiration from his own travels through Greece, the United Kingdom, New Zealand, Victoria, Tasmania and the islands of the Southern Ocean, all the way down to Antarctica, Smith celebrates the universal currency of journeys as a tool of both mining and making history. In Greece the artist travelled through Pylos where Homer reported on the arrival of Ulysses' son, Telemachus, and he witnessed the recently unearthed bathtub where Telemachus was bathed. Evincing this transcendent power of objects, Smith’s new collection incorporates found relics such as a 200BC Greek vase, creating a new kind of artefact-based sublime. ‘Objects that have come from the past, yet stand before us in the present, resonate with an infallible truth about their existence’, the artist explains, ‘What do they say of History? What does the artefact bath of Telemachus say of the mythology of Homer’s Odyssey, (c. 800BC), where it is reported?’

In his paintings, vast naturalistic cloud formations mirror cartographic renderings of landmasses, ephemerally floating in the sky’s infinite ocean. Painted over these serene landscapes are fixed marks and dotted lines representing a traveller’s wake – be it Telemachus in Pylos, the Opportunity Rover across the surface of Mars, Neil Armstrong's footprint on the moon, Aboriginal footprints tracked in the Lake Mungo Desert, or the Lady Nelson passing Cape Otway in 1800. Some of the works reflect a recent journey through Victoria’s west, where Smith came to see the monolith of Mt Arapiles as an ancient sea wall from a time when a vast inland sea covered much of Central Australia. Hidden in the Wimmera’s remote dry grasslands he found the quintessential Australian billabong, almost drained and darkened with the stench of death, yet presided over by a bathtub standing at its flanks. Each panoramic scene palpably exists at a nexus of time and place, and yet they are timeless – the gentle gradient of the setting sun reminding us of the continuum between the foreground of today and the horizon of history.

The wonder or ‘pure serene’ of sublime moments of exploration is filtered through a personal lens as Smith reflects, ‘I have experienced the sublime in the physical (over)power, almost terror, of Iceland's Dettifoss Waterfall, or the pastoral serenity of rural spring in New Zealand during lambing season with a constant watch on the changing skies’. Keats’ poetic verse is painted beside coordinates, diagrams and equations, paradoxically melding the language of Romanticism – historically a reaction against the scientific rationalisation of nature – with scientific vernacular. Topologies of text mingle with geographical formations to spawn metaphors in mathematics, beauty in science, truths in poetry and knowledge in art. Trees and headlands silhouetted by the dwindling rays of dusk conjure liminal states within which light and enlightenment are intertwined, and here the viewer may discern Keats’ whispering words, ‘Then felt I like some watcher of the skies / When a new planet swims into his ken.’

1. On First Looking into Chapman's Homer
by John Keats, 1816

Much have I travell'd in the realms of gold,
And many goodly states and kingdoms seen;
Round many western islands have I been
Which bards in fealty to Apollo hold.
Oft of one wide expanse had I been told
That deep-brow 'd Homer ruled as his demesne;
Yet did I never breathe its pure serene
Till I heard Chapman speak out loud and bold·
Then felt I like some watcher of the skies
When a new planet swims into his ken;
Or like stout Cortez when with eagle eyes
He star'd at the Pacific-and all his men
Look 'd at each other with a wild surmise¬
Silent, upon a peak in Darien.

Viewing an installation of paintings and found objects by Peter James Smith is always a cinematic experience - like reading visual images in a darkened room, the narrative sense remains open-ended. As the viewer shifts to engage with word and image, blackness and illumination, image and object, many evocative interpretations unfold. Smith’s realist landscape and still life paintings are bathed in revelatory light and juxtaposed with florid handwritten citations and notes, both poetic, scientific and historical in nature, serving as evidence of the artists reading, jottings, diagrams and erasures. The accompanying found objects – a book of verse, a pile of bricks or a Chinese vase – provide a resonant foundation from which the artist engages with ideas of surface and symbolism, bringing to each a Beuysian sense of the charismatic object.

The works for Round Many Western Islands are drawn from the artist’s many travels to Greece, United Kingdom, New Zealand, Victoria, Tasmania and the islands of the Southern Ocean, all the way down to the Antarctica and present overlays on connections, on journeys, on sublimity and on found physical objects. This new show celebrates Smith’s eclectic exhibition style and the sublime sense of possibility and discovery, while also addressing contemporary uncertainties. 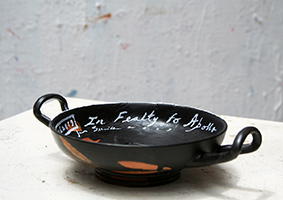