Points of View: From the outside looking in

Showcasing a selection of new works that see the Harbour city presented with fresh eyes and new perspectives, we invite our Sydney friends, clients and peers to come and say hello and enjoy these creations in the flesh.

* please consult this page for any changes to gallery opening hours

Sydney is an amorphous place; a cauldron of collective experience that melts and morphs with each new set of eyes. In this exhibition, four Melbourne artists excavate their remembered perceptions of a city not their own; a city that is entirely subjective.

Known for his meticulously detailed Victorian landscapes and Melbournian streetscapes, William Breen constructs liminal moments suspended in time. An otherworldly lustre lands on the contours of his topographies, which are rendered with soft, indistinct edges as if pulsing with energy. This sense of kinesis – in hyper slow motion – is hedged by feelings of stasis, of timelessness. Fossilised by his observant brush, Breen’s vistas become nostalgic relics of a receding past freighted with the lived narratives of generations. Shifting his focus away from Victoria, Breen recently travelled to Sydney where he harvested imagery of an area familiar to him, the Inner West. Circumventing the glaring signs of gentrification, he captures the colorful residue of Newtown’s fading self; the graffiti, aged walls and well-trodden footpaths refusing to retire. A second work presents a darker view of the city painted like one of his rural landscapes – ‘it’s a kind of crossover piece’, Breen explains. Hazy buildings herded against a sky streaked with emerging light prompts us to mediate on the multifaceted identity of a city fraught with a dark past and a bright future.

Zac Koukoravas’ large scale compositions, painted on multiple layers of glass and perspex, form a schematic rendering of plural possibilities; of receding memories and emerging truths. Drawing from traditions of graffiti, architecture, electronic music, political activism and the urban environment, Koukoravas deconstructs his surroundings into planal landscapes that peak, plateau and plunge. His abstracted polygons evoke existential dualities; order and harmony are met with chaos and cacophony as shadow, light and space converge. The artist’s new works respond to the Sydney Opera House, visually echoing its futuristic design whilst also contemplating its embodied cultural aspirations. We can spot something of the unfurling sails, the smooth surfaces and the architectural optimism in Koukoravas’ paintings, which seem to fold and bend in agile movements before our eyes.

Marise Maas distils narratives from the ennui of the everyday, revealing the beauty in the banal; the poetry in the prosaic. Her stylised, form-driven paintings capture those ostensibly insignificant moments against which the theatre of life unfolds. Having emigrated from the Netherlands to Tasmania when she was thirteen, and now based in Melbourne, Maas approaches Sydney with the perspective of an outsider. ‘Thinking of Sydney is always met by the feeling of holiday memories’, she reflects. For Mass, Sydney represents the notion of transience, and her new works reconstruct remembered experiences from fleeting visits. Painting from observation and imagination, the artist intuitively engages with the formal elements of composition, line, shape and texture, consciously avoiding the conceptualisation of a city already overripe with critical currency.

The mimetically articulated paintings of Brett Ferry represent the ‘post-digital landscape’ in the age of the Anthropocene, foregrounding the resilience of natural forms against the interfering hands of humanity. Working with observation, photography, digital manipulation, airbrushing and oil painting, the artist creates a formal dialogue between contemporary media and traditional methods, symbolically suggesting an era at a major ideological crossroads. Engaging with the theme of Sydney, Ferry thinks back to his teenage years, when the animated landscapes of Brett Whiteley had a formative influence on his burgeoning love of art. Paying homage to the Sydney-based icon, Ferry supplants Whiteley’s ideas of personal excess and hallucinatory exploration with that of human excess and digital distortion, spawning gestural incarnations of landscapes struggling to survive. Anthropomorphic trees twist towards the psychedelic sky, their malformed limbs like ancient arms reaching for divine help.

Through the subjective painterly lenses of these four artists, we find partial portraits of Sydney’s polychromatic physiognomy and personality, where the ordinary meets the iconic; the familiar dances with the foreign. 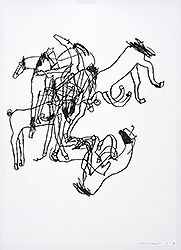