**We are delighted to pass on our 20% gallery discount for framing at Omnus Frames for all FLG clients who purchase an unframed artwork.

Marise Maas strips back the use-value of things and considers their affective, aesthetic and emotional potency. Her paintings excavate the beauty in the banal, harnessing small moments as stages for larger – albeit ambiguous – stories. The micro and macro coalesce into new narratives that strip away material hierarchies and open up a space for the somewhat paradoxical experience of subjective objecthood.  Born in the Netherlands, Marise Maas immigrated to Australia with her family in 1982. Maas’ work is represented in numerous major collections nationally and internationally, including the National Gallery of Australia, Artbank, BHP Billiton, Swinburne University of Technology and National Australia Bank Collection. She lives and works in Melbourne.

Close observational drawing forms the core of Kim Anderson’s practice as she explores the physical manifestations of a psyche in turmoil, and the ever-shifting relationship between our inner and outer worlds.  With a consistent tendency towards intricate detail Anderson's practice focuses on how powerful internal emotions such as grief, despair and longing can be embodied, often using elements of the external landscape as metaphors for these intense psychological states.  Much of her work involves a deeply personal psychological scrutiny in order to confront the more difficult aspects of human experience. She has exhibited both in Australia and abroad with solo exhibitions in Melbourne, Mildura, Bendigo, Bathurst, Ballarat, Launceston, Hobart and Japan, and has been a finalist in numerous national awards including the Lyn McCrea Memorial Drawing Prize (Winner of the Peoples Choice Award 2019), Paul Guest Award (2018, 2016), the Rick Amor Drawing Prize (2016), the Eureka Art Prize (2016) and the Hazelhurst Art Award (2013).  Along with more traditional works on paper, Anderson has also created ephemeral installation projects involving site-specific drawing and projection, most notably The Space Between, a visual/sound installation at the inaugural White Night Ballarat in March 2017 which subsequently travelled to the Salamanca Arts Centre in Hobart. In 2018 Anderson held a major solo exhibition To Live Alone in a World of Wounds at the Art Gallery of Ballarat as part of the Biennale of Australian Art.

Predominantly working with pastel on paper, Amber-Rose Hulme creates evocative, photo-realistic representations of the urban and industrial everyday. Interested in the idea of graffiti as a visual form of conversation between the many individuals who contribute to these constantly evolving murals, Hulme uses light, texture and the inevitable nature of decay to draw out ideas of social circumstance and the experience of a personal or cultural identity. Laneways, back alleys and abandoned industrial sites, each emptied of human presence, serve as the many backdrops for a melancholy awareness of the transience of human endeavour, and the beauty of the graffiti that enlivens the spaces we inhabit.The last few years have been busy ones for Hulme, who has been a successful finalist in numerous awards including the Hazelhurst Art on Paper Award (2019), the Muswellbrook Art Prize (2019, 2018, 2015), Bendigo Art Gallery’s biennial Paul Guest Prize (2018), the Rick Amor Art Prize (2016), the Stanthorpe Art Prize (2016), the Hutchins Art Prize (2015) and the Sunshine Coast Art Prize (2015).

Annika Romeyn is striving to connect the realms of micro and macro, representation and abstraction, Romeyn’s recent artworks are inspired by rock formations and geomorphology. Beyond describing the rock-face and its multiplicity of form, Romeyn hopes to create experiential artworks coloured by her memories and feelings of wilderness areas actively explored by foot, raft or kayak. Working across the mediums of drawing, painting and printmaking she is particularly interested in manipulating the luminosity of watercolor to bring the canyon wall to life, as a site of intersection between the intimate and the infinite, the immediate and the ancient.   Romeyn graduated with First Class Honours in Printmaking and Drawing from ANU. In 2019 she was awarded the Commendation Prize for the Banyule Award for Works on Paper and in the same year was invited to participate in Global Print 4, Portugal, one of the largest printmaking events in the World, and was the the recipient of a Craft ACT Residency at Corin Cottage within the Namadgi National Park. She has been a finalist in the Megalo International Print Prize (2020), the Fremantle Arts Centre Print Award (2019) and received the Commendation Prize for the Banyule Works on Paper Award (2019). In 2018 she was commissioned to create a unique work for the Biennale of Australian Art.  She has been a finalist in the M16 Drawing Prize (2018) , the Splash: McClelland Contemporary Watercolour Award (2018), the Gippsland Print Award (2017) and the prestigious John Leslie Art Prize (2020, 2018, 2014) and was the winner of the FLG Emerging Artist Award (2014). In 2013 she was commissioned to create a unique work for the Print Council of Australia and undertook a Hill End Artist Residency in 2015. Her work has been acquired by Canberra Museum & Art Gallery, Gippsland Regional Gallery, Arts ACT (A.C.T. Government), KPMG, Port Jackson Press Australia, The Australian National University Library, Megalo Print Studio, Print Council of Australia Inc., The State Library of Victoria, Canson Australia, Burnie Regional Art Gallery, Monash University Gippsland, Print Biennial Douro Collection, Portugal and The Brooklyn Art Library, New York amongst others.

Melanie McCollin-Walker’s artistic journey began whilst growing up on the island of Barbados. Always the wanderer, it is Melanie’s nomadic lifestyle which has been a major source of inspiration. She relies on her innate sensibilities, using a combination of memory, observation and emotion to create her work. The landscape provides the framework within which the artist’s journey takes place with each painting providing a window into her subconscious, whilst also challenging the viewer to delve deeper into their own. Her subtle and painterly technique and meticulous and painstaking layering, create atmospheric, light-filled, dramatic work, which provide a sense of place whilst simultaneously evoking both mystery and curiosity.

Attracted to the ways in which pattern and line intersect with form and colour Karlee Rawkins’ skilfully integrates discernible representation with subtle abstraction. Pointed ears become daring triangles, nimble legs yield to their verticality and wings splay out to form intersecting globes across the picture plane. This dexterous sense of composition and lively mark making is captivating, revealing both child-like veneration and sophisticated appreciation for the form and character of her subjects. Thus Rawkins’ paintings hold within them a range of concerns from the personal to the global, questioning our relationship to nature and more broadly to themes of mortality and even extinction.  Rawkins trained at Southern Cross University and has exhibited extensively since 1994. In 2003 she was the recipient of The Brett Whiteley Travelling Scholarship and in 2004 she held a 5 months residency at Cité Internationale des Arts, Paris, France. In 2019 she won the Mosman Art Prize Margaret Olley Commendation Award, was a finalist in the Clayton Utz Award (2019, 2018), the Korea-Australia Arts Foundation (2016) and the Prometheus Art Award (2007, 2005). Her work is held in the collections including that of Maitland Regional Art Gallery and the Art Gallery Of NSW.

Leah Thiessen lives and paints in Northern NSW, and her work is a direct response to the bush, beaches and mangroves that surround her home. Thiessen has been a finalist in the John Leslie Prize (2020), the Glover Prize (2020), the Clayton UTZ Art Award (2019), the Gosford Art Prize (2019), the Calleen Art Award (2019, 2016, 2015), the John Leslie Art Prize (2018, 2016) the Pro Hart Outback Art Prize, and the Paddington Art Award among others. She has exhibited nationwide since 2010. Her work is in the Arthur & Suzie Roe Collection. ‘My work taps into the emotional gravity of a place, its memory, its pulse, its rawness and power. For me the paintings communicate a deep felt relationship with the earth, embodying a spirit of place and its atmosphere. The images are a direct emotional response to the bush, beaches and mangroves that surround my home. My paintings explore unique ways of capturing the diversity of the natural terrain. I am interested in local flora, protected plant species, seaweeds and noxious plants. I often start my paintings with the small delicate details found in the bush and then depart to a place of frantic energy.’ Artist Statement

Gina Kalabishis' career to date has seen her take out the titleof Winner for the Eutick Memorial Still Life Award (2017),  the People’s Choice Award for the Bayside Acquisitive Art Prize (2017), the People’s Choice Award for the Bruny Island Art Prize (2016) and the Rick Amor Drawing Prize (2014). She has been a finalist in the John Leslie Portrait Prize (2020, 2018), Kedumba Drawing Award (2016), the Eutick Still Life Award (2014), and the Adelaide Perry Prize for Drawing (2014). In 2019 Gina Kalabishis exhibited at Wayne State University, Detroit in THIS LAND IS…, a group exhibition addressing current and future environmental concerns.She exhibited in the group exhibition Verdant Garden at Bundoora Homestead Art Centre in 2017 and was also included in a group exhibition Romancing the Skull at the Art Gallery of Ballarat in the same year. Her work has been featured in the award winning publication NATIVE: Art and Design with Australian Plants, written by Kate Herd and Jela Ivankovic-Waters  (published by Thames  & Hudson). In both 2016 and 2017 Kalabishis was Artist Residence at the Bundanon Trust Studios, Illaroo NSW. 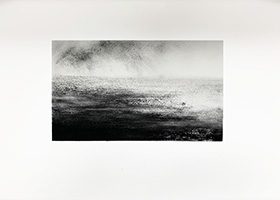 Gina Kalabishis
The Times They are a Changin' (after Bob Dylan) 2020
ink & gouache on watercolour paper, unframed
75cm x 56cm