Michelangelo’s sculpture of David, Titan’s renditions of Venus, Freud’s fleshy figures, Emin’s provocative drawings and Henson’s photographic cinematic youths - the theme and controversy of the nude has been portrayed in both historical and contemporary art practices for centuries. For this exhibition, we invite select FLG represented and guest artists to create a new nude in response to our times. 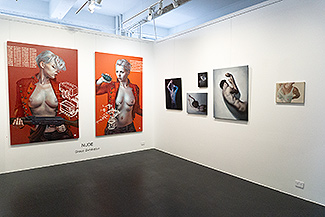 Extensive travel has provided Kathrin with a unique perspective on the role of women in the media, her more recent works referencing not only communist propaganda but also the power of advertising in our lives under a capitalist system.  Her skilfully rendered subjects layer themes of sexuality and freedom, both seducing and challenging the viewer with their ruby lips, luminous bare skin and confronting gaze to illustrate her message that, ‘Propaganda is all around us.  It’s not specific to a period of time, a country or a regime…it’s everywhere’. 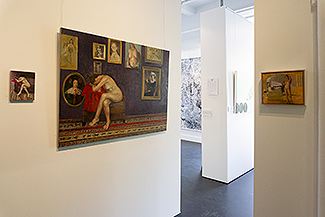 Through her decidedly narrative style it is as though we have been allowed to catch a voyeuristic glimpse of someone else’s life, peering through a door left slightly ajar. Luscious brushstrokes create both a cinematic and dreamlike sensibility, while her palette of greens, blues, and ochres create a disarming suggestion of both the emotive and poetic. These works are utterly seductive, poignant and mysterious. 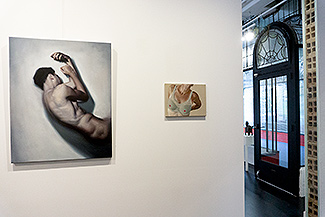 Chelsea Gustafsson explore notions of loss, awkwardness, hope, failure, success and victory. These experiences, common to us all, can often feel quite unique and self-defining and, within the context of Gustafsson's practice, highlight the random, coincidental and often serendipitous nature of life’s reception.

Not one to shy away from confronting subject matter, Janne Kearney’s hyper-real, brilliantly colourful paintings explore issues surrounding gender inequality, the experiences of people abandoned by society, as well as portraying the trauma inflicted by a disjointed youth justice systems. By dissecting societal stereotypes her works strives to highlight the social challenges faced by these marginalised individuals and asks her audience to disregard preconceived ideas about people, cultures and gender. 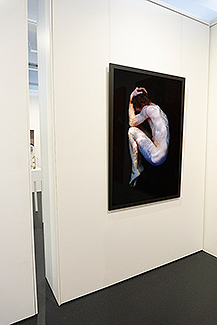 Cowell’s images connect the viewer with both the real and imagined, and the creative realm of dream and fantasy. Themes of impermanence also emerge via the seemingly endless, inky blackness that envelops her forms. 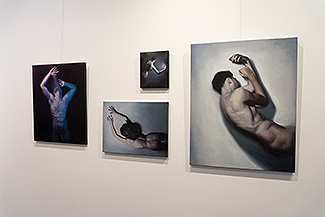 Michael Simms is a multi-award winning artist based in Sydney. His work is characterised by dream-like depictions of the human figure, from traditional portraiture to the surreal. His particular interest is exploring the entanglement of technology with the human experience and modalities of queer identity. His work combines elements of classicism, romanticism, surrealism and psychology, creating emotionally charged scenes that provoke questions about identity, beauty, isolation and anonymity in the digital age.

The works included in ‘Nude’ contrast the sublime alongside unease in modern life. Dynamic and expressive falling poses reflect the dizzying nature of the new technology era, while a perfectly sculpted male figure alludes to historical depictions of the nude as a symbol of strength and heroism. It’s that tension between strength and vulnerability - particularly in a queer context - that was the genesis for these works. 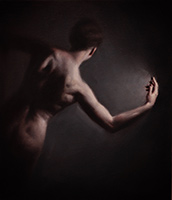