Gustafsson’s paintings explore the boundaries and crossover of the natural and man-made worlds. Coalescing together, assemblages of everyday objects levitate in a seemingly peaceful and effortless manner. Both beautiful and ugly, pleasing and awkward, there is, however, a mood of something being not quite right as innocuous man-made objects plague and impinge on their organic companions.

“I like to play with objects and textures that don’t necessarily sit well together naturally. Through the process of constructing items into a sculptural form and twisting or balancing them to find their sweet spot for a composition and watching how the light falls and reflects across them, they begin to gel as a single form and a beauty emerges. It’s this tension of what’s seemingly pleasing yet has an underlying awkwardness that I find a kind of peacefulness in. Time in my studio creating is my coping mechanism for contemplating the complications our world is faced with. The works are a response to an expectation of finding an awkwardly acceptable point of existence in a world that we’re told is changing whilst being presented with both frightening facts and stories of hope and solutions.”
Artist Statement 2021

Catalogue essay by Andrew Gaynor 2021
Chelsea Gustafsson lives in an idyllic coastal village near the Great Ocean Road. Her studio is at the fringes of the huge populations that swell these parts during the holiday seasons, but for Gustafsson, their impact is never far away. Her daily routine includes a long walk on the beach with her border collie Scout, during which she collects any plastic fragments that she sees. “It only took two minutes to fill my pocket this morning”, she says with a sad shake of her head. As an artist with a strong environmentalist attitude, Gustafsson ponders the dilemma of exactly what she can do or contribute with her paintings to this anthropocene world, one marked for eternity by the errors of humanity. The images in Not Quite Right represent her attempt to create “a pause to consider self, place and time” whilst simultaneously re-locating some beauty within the flotsam and jetsam now staining our shores.

In her previous exhibition at Flinders Lane Gallery, Comfort Kills (2019), the artist collected a host of discarded chairs from roadside graves (hence the punning title) painting them in all their faded glory before they returned to their fate on the nature strip.i In related works, such as Mr Shark (2020), she added whimsical sculptures to the chairs made from other discarded rubbish or existing objects from her studio. Having spent ten years working as a sculpture assistant, this three-dimensional aspect to her talent now finds greater expression in Not Quite Right where the assemblages themselves have now become the focus. Gustafsson uses the detritus to construct globes that display glaring traces of their fabrication – packing tape, glue drips, staples and the like. It is as if all this world’s man-made junk has been dragged into space then shaped by orbital forces into celestial orbs, subsequently gaining their own moons in the form of other plastic objects. Crap sums this up succinctly – a satellite of cardboard (the waste ironically left by another environmentally-conscious company), held together by packing tape, is then belted by a ‘Happy Wanderer’ vine,ii itself representing an attempt at providing some vegetation for such a desolate planet. A similar grim humour infuses Lemon Sharks where the grinning plastic bath toys of the title circle a barren rock, interspersed with equally artificial flowers. It is impossible not to smile at this haunting image. Magritte would have loved it.

Gustafsson’s technique is pivotal to the success of these paintings. Akin to realism, she is adamant they are not hyper-real. She wants her images to remain visibly painted and to achieve this, she uses hardboard as a support and thin layers of paint, augmented by rubbing and/or palette knife to create contrasting visual effects. For this artist, hiding the brushwork would be fraudulent as Gustafsson wants the viewer to think about her paintings’ construction. Bouquet displays the success of this strategy with its agitated background inferring some undefinable depth of field. The magnolia-like bloom of the title is shaped from plastic foam, smartly adorned with yellow plastic rope at its waist. Holding on for dear life is a wilted native frangipani, one of the few natural objects in the whole exhibition. In spite of its stricken state, the plant is not dead yet and, like our damaged Earth, may soon hopefully revive.

[i] ‘Nature strip’ itself should be recognised as a bad, even tautological, pun. 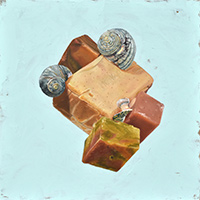