Zac Koukoravas creates paintings of abstracted, geometric formations that seem to float effortlessly in space. Slick and chic, his paintings are reminiscent of contemporary kaleidoscope formations that ebb and flow as the viewer moves towards and around the artwork. He explores the visual play of light, depth, shadow and space to create works of complex and illusionary geometry.

The compositions are inspired by a diverse range of references – from graffiti and electronic music to natural and urban environments or landscapes – which manifest through his works in a variety of ways. Excerpt from Blue Lines catalogue essay by Owen Craven, Melbourne-based Senior Curator with UAP.

Mixed Messages was conceived in response to the increasingly popular use of the term ‘fake news’­, a political catchphrase currently being adopted by climate deniers and propaganda spin doctors. Melbourne artist Zac Koukoravas views the use of this term as a means to deflect and deliberately muddy the significance of today’s political messages. Playing on the themes of deflection, illusion and subversion the artist considers his work as a mirror to our contemporary times.

His is a hard/soft-edged, intriguing dialogue of piercing forms, yet possessing an atmospheric quality created by a sfumato effect that draws us into potent spaces in and around the painted surfaces. The overlapping directional shapes, the materials used and the application of paint by airbrush suggest a sense of fragmented soundwaves in deep space and of the ‘far away’, as if pointing to the future. Texture is denied. Surfaces are smooth and screen-like, and within these forms there are suggestions of the physical presence of another, more tenuous world.

As with many artists, materials and processes formulate the entrance to these ‘other’ worlds. Koukoravas’ works consist of layered sheets of glass and acrylic, painted on both sides, suspended within a darkened interior frame. By purposefully using a limited range of enamel and acrylic colours, the meticulous shapes within his compositions are delicate, floating as if in a space both microscopic and vast. They permeate a sense of mystery. Traditional brush marks and textures are absent in this conversation of contrast: sharp and soft, opacity and transparency. Pellucid forms both emerge and recede, shifting focus from background to foreground and back again. 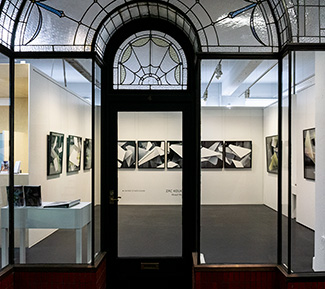 Within the five panels that make up the major suite Mixed Messages I – V, Koukoravas manipulates the interplay between various repeated transparent layers, changing their configurations and relationships to suggest a sense of multiple readings, binary view-points and possible alternative truths. Amidst the mutable actions of the forms depicted, contradictory qualities of touch and sound can almost be experienced, expanding the viewers awareness of looking into these floating, honed shapes.

As evidenced by the inherent dynamism of these paintings, there is also an association with the artist’s ongoing interest in sound. Auditory noise is suggested by the defining and positioning of shapes, their loudness or forte, their softening or pianissimo. This can be seen via the gradational tonal palette and corresponding hard and soft edges moving in multiple directions. His interest in the aleatoric, or chance, in both music and painting is reflected in his processes of making and construction. Within the sometimes scattered placement of forms and composition, there are perhaps suggestions of the clamouring voices heard within our 24 hour news cycle.

Koukoravas sets strict boundaries for himself within the seemingly infinite possibilities of his materials and forms. It is within these limitations that the artist plays with notions of communication, reception, truth and illusion. Mixed Messages is an evocative exhibition that engages not only with materials used and our senses, but more widely with our political and cultural discourse. 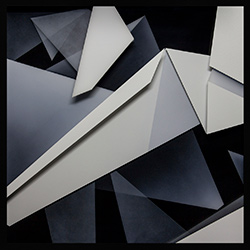