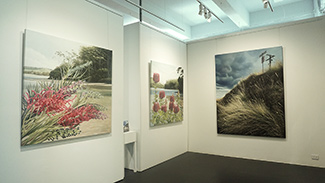 Soft blooms give way to calm vistas, silhouettes of evergreen trees are reflected in lakes, and one can sense the wind whipping through fields as a storm swells. The paintings of Naomi White are an ode to the elements that inform our Australian landscape, from the intricate and minute to the grand and monolithic.

The artist has developed a painterly language over the last seventeen years that shows an intimate understanding of the land, and how it responds to us and in spite of us. From the exquisitely lush rainforests of Australia’s far north east and while on residency in locations such as the pristine Tasmanian wilderness, White acts as both painter and botanist, collecting samples and photographs of sprigs and fronds and returning to the studio to immortalise them on canvas.

For this most recent exhibition, Layers of Life, White endeavors to capture exactly that – the layers of the natural world that act as a backdrop to the drama of our lives. By marrying grand panoramas with diminutive detailed examinations of chosen flora, the viewer is presented with a composition where foreground and background are collectively in focus. Banksias are depicted before a still natural lake, and sanguine grevillea dance also by the shores of waters’ edge. White writes about one of the largest paintings of this exhibition, ‘Wild West,’ by stating, ‘In Wild West, once one’s vision moves beyond the overreaching branches that frame the wider landscape, I want the viewer to settle on the intricacies of tiny wild flowers that make up the field beyond. On mass it makes for a vast display of colour that is both mesmerising and a reminder of things that we cannot control.’ Nature spreads and finds it course here, just as we do within it.

Not limiting herself to canvas, this diverse body of work also utilises gouache in this exhibition. Similarly to botanists of the past who engaged watercolour to render the specimens that piqued their interest, White illustrates eucalyptus groves and residential gardens, aquatic flora and wattle. Her brushstrokes light and palette representational, these smaller works capture an almost whimsical view of the natural world, where the juxtapositions within their composition allow again for an intimate yet all encompassing view of the environment the artist is choosing to depict.

It would be remiss not to note that White’s exhibition comes at a time where this commentary of the natural world is a poignant one. White has adapted the way she composes her work to explore different perspectives of the environment she has come to know so acutely, and as her compositions change so is the environment changing around her. The scenery that has been canonised by brush, oil and gouache may never again be viewed in this way. Bushfires ravage age old forests and floods terrorise residential gardens, homes and lives. Just as fauna species fly close to the brink of extinction so too will plant subspecies that won’t be able to regenerate at a pace necessary to withstand more frequent occurrences of devastation.

And so let’s take solace in White’s oeuvre, where serene celebration of the world is meditative and complete. Here the delicate representations of foliage and landscape will remain vibrant and fecund, and so these works become totems of celebration and immortalisation, reminding us that as our relationship with the elements becomes evermore tumultuous, so we must protect, preserve and honour it like never before.