I am certain of one thing – if we do not strive to love our planet as much as we love ourselves, then no further human progress is possible here on Earth.
– Tim Flannery

Held within the cellular structure of all living things, a glimpse of the infinite is possible. Full of variation and adaptability, the creative force that drives the formation of all life on earth offers an endless source of wonder, possibility and reflection.

Never directly observational in their depiction, but rather emblematic of an imagined representation, Melbourne artist Melinda Schawel’s richly textured works on paper and metal serve to suggest the organic. Forms akin to lichen, coral spores, spider eggs, macrophages and pollen coalesce in a visual distillation of ecological proclivity.

Deeply affected by the environmental catastrophes currently impacting the Australian landscape, Schawel has recently found herself oscillating between a deeply negative and conversely hopeful outlook for the future. Channelling ideas of reciprocity between all life forms, her art practice articulates both an intense appreciation of those forms manifest within nature, and a sense of anticipation for the emergence of a new political and ecological ‘whole world’ view.

In an almost cathartic reaction to her own climate anxieties, Schawel (who has always invited elements of chance into her practice) has embraced a new level of the unknown by working both sides of her materials simultaneously. While much of Schawel’s alternating viewpoints are ultimately hidden within her final images, the choice to do so has nonetheless informed important steps within the creative journey. She speaks of a constant process of giving and taking, of responding to the unexpected, observing fine details and also stepping back to see the bigger picture. This constant shifting of view point suggests a somewhat vigilant, watchful state symptomatic of worry, as well as one of fascination. She states that “feelings of helplessness and despair will have inevitably seeped into these works, but the underlying message will hopefully be a positive one as I hold out hope for nature’s ability to flourish despite human ineptitude.”

Working within these alternating aesthetic negotiations, Schawel explores concepts of darkness and light, solidity and permeability, and states of instillation and impasse. This process of switching back and forth also serves to highlight the complex variety of conversations currently required within our community if we are to achieve a sustainable future. Images such as Maybe It’s All Going To Turn Out Alright echo the concerns held by so many of us as we watch these climate events unfold, and opens up a dialogue between ideas of doubt and optimism.

Within her highly saturated marks and relentless sculptural incisions everything is in a state of flux. We are witnessing nature’s endless state of adaption and change expressed through art. The Flip Side is thus a daily meditation, both contemplating the constantly shifting state of the environmental systems that sustain us, while also interrogating the failings and obligations of human adaptability.

Born in Illinois, USA, Schawel received a BA in Fine Art from the University of California in 1993 and a Postgraduate Degree in Printmaking from RMIT in 1996. Schawel is a Finalist in the 2020 Adelaide Perry Drawing Prize, she won the People’s Choice Award for the Adelaide Perry Drawing Prize (2018) and held a successful solo exhibition at Art Central Hong Kong (2018) and at Sydney Contemporary (2018). She has recently been awarded a public art commission for the City of Casey. She has been a finalist in the Whyalla Art Prize (2017), the Nillumbik Prize (2016, 2015, 2013) and the Fisher’s Ghost Art Award (2015, 2012). She has undertaken residency at the Art Vault in Mildura (2016), Chiang Mai Art on Paper Workshop, Thailand (2015) and at Frans Masereel Centre, Kasterlee, Belgium (2004). Her work is held in the collections of the National Gallery of Australia, Artbank, Crown Casino, Geelong Regional Gallery and the Royal Museum of Fine Art in Antwerp, Belgium. She has exhibited regularly since 1995 and has been selected for a number of prestigious commissions, for corporate spaces such as the Westin Hotel and the Park Hyatt in Melbourne.

She has been represented by FLG since 2000. This will be her eighth solo exhibition with us. 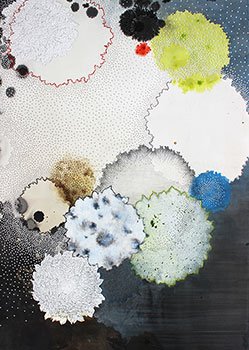