This new series of work presents a hypothetical and metaphorical future; the world of the Posthuman. Here, the earth has been stripped of its foliage, and humans have become gods, genetically manipulated and ageless, and yet beholden to the omnipotent voice of our digital devices. These youths – preternatural clones of perfection – are suspended uneasily within a purgatorial landscape; connected but also disconnected.

The Eternal Youths acknowledges contemporary anxieties about the planet that we will leave for our children, presenting the ‘perfect’ youth as a metaphor not only for the loss of our natural world, but also our innocence and humanity.

* Watch Rebecca Hastings as she takes us behind the scenes in her studio, while working on her Eternal Youths pieces. (Video by Roh Smith, 2018)

This series of works is a speculative investigation of the Posthuman condition and is informed by my recent journey to Osorezan in Northern Japan. Translated as ‘Fear Mountain’, Osorezan is believed to be one of the gateways to the underworld in Buddhist Japanese mythology.  It is a place of sublime and inhospitable harshness; a charred landscape of blasted rocks upon which toxic, acidic waters gently lap at the shore of the caldera lake of an active volcano. From higher ground, an imposing statue of Buddha casts his stony gaze across this hellish, stinking place. Stone effigies adorned with baby’s bibs are dotted throughout, for it is the souls of lost children that are mourned here, too young to have accrued adequate karma to depart this purgatorial landscape. Accumulations of stones and rocks are heaped into cairns, placed by anguished mothers and fathers as offerings to the gods in return for their children’s safe passage across the river.
Artists Statement 2018

'Brave New World is either a perfect-world utopia or its nasty opposite, a dystopia, depending on your point of view: its inhabitants are beautiful, serene, and free from diseases and worries, though in a way we like to think we would find unacceptable.'
Margaret Atwood, ‘Introduction’, Brave New World, 20071

In Rebecca Hastings’ latest series of paintings, seven identical, haloed youths present an ideal of ageless perfection, their cool imperturbability suggestive of bioengineered beings, empowered to transcend the merely human. Describing The Eternal Youths as ‘a speculative investigation of the posthuman condition,’ Hastings has shifted her attention from more subjective reflections on the nature of motherhood, to a contemplation of the future world her children might inhabit.

Inscribed on the chastely high-necked, pastel uniforms of these youthful deities, a layered lexicon of motifs acts as signifiers for Hastings’ broader, post-certainty concerns which include (not exclusively) anthropogenic climate change2; the omnipotence of digital technology and ethical issues associated with genetic engineering. In a reference to our society’s veneration of youth, other visual information – stigmata-like markings and distinguishing hand gestures – are allusions to religious iconography. Now acknowledged as essential to the survival of the planet’s ecosystem, the honeybee, which is also capable of issuing a painful (occasionally fatal) sting, is like the syringe and drone, indicative of the artist’s predilection for imagery that is open to multiple possible interpretations.

Inevitably these impassive clones of preternatural perfection – undisturbed by levitating objects that occupy a space between reality and imagination – engender a sense of unease. Masked by oversized eyewear, they refuse the gaze of the viewer, raising uncertainty about what might lie behind the opacity of the lenses (the platinum-haired children with ‘the stare that threatens all mankind’ from the 1960 film the Village of the Damned come to mind). However, Hastings indicates that the oversized lenses are intended to suggest a large-eyed aesthetic sentimentalised in art, as well as contemporary culture (the selfie), but adds that they are also reminiscent ‘of the cold, disengaged stare of the insect, a creature, with whom we cannot connect empathetically.’ She cites the example of the razorgirl character in William Gibson’s Sprawl trilogy (1984-’88), who possesses extensive cybernetic modifications, including ‘implanted mirrored lenses covering her eyesockets, outfitted with added optical enhancements.’

Dual experiences – emblematic of the ‘mish-mash of contemporary pop culture and spiritual tradition’, the old/new binary which characterises modern Japan – inform the work in The Eternal Youths. Hastings’ visit in 2017 to Tokyo’s National Museum of Emerging Science and Innovation3 provided a striking contrast to the journey she undertook to Osorezan – considered an entrance to the afterlife – in northern Japan. Sulphurous air suffuses a desolate, volcanic landscape of charred rocks and toxic pools, which is a sacred site of pilgrimage for the parents and relatives of deceased children, trapped in a Buddhist iteration of purgatory. For Hastings, this liminal state serves as a metaphor for the experience of her god-like eternal youths – fated to be forever suspended between life and death.
She poses the questions: ‘What loss of humanity will we suffer in living forever? Who will decide to which version of “perfect” we must subscribe? How will this unnatural selection influence our evolutionary path?’

ENDNOTES
1. In Huxley’s Brave New World (1932), babies were grown in hatcheries and disseminated according to the needs of the population. The plot of Margaret Atwood’s similarly dystopian 1985 novel (set in a totalitarian near-future) is driven by a decline in fertility, brought about by environmental pollution. At the Women’s March on Washington  – a day after Donald Trump’s inauguration – a protester was photographed carrying a placard with the slogan: ‘MAKE MARGARET ATWOOD FICTION AGAIN.’
2. See: Amitav Ghosh, The Great Derangement: Climate Change and  the  Unthinkable, Chicago: University of Chicago Press, 2016
3. Miraikin is a science museum, where Japan’s position at the forefront of robotic technology is showcased.
4. All unattributed quotes are from the artist’s unpublished exegesis ‘The Eternal Youths: Unnatural Selection in The Age of The Anthropocene’ and an interview with the writer in Adelaide on 20 September.

Rebecca Hastings graduated from the Adelaide Central School of Art in 2011 with a Bachelor of Visual Art (honours) and was recently awarded an Australian Post Graduate Award for a Masters Degree in Visual Art at UniSA in 2016. She has received numerous awards and grants including the Pleysier Perkins Emerging Art Prize in conjunction with FLG’s Exploration 12 exhibition, the 2012 SALA Festival Award at the Helpmann Graduate Exhibition and an ArtSA Project Grant. She has been shortlisted for the BP Portrait Prize at the National Portrait Gallery, London (2015), and has been a finalist in both the Archibald Prize (2014) and Sulman Art Prize (2014, 2015). 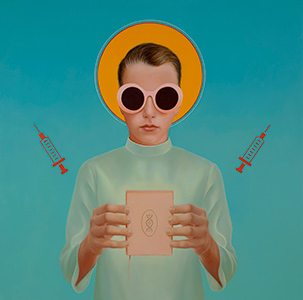