Koukoravas’ large scale works, painted on multiple layers of glass and perspex, are characterized by his use of shadow and light, depth and space. Layering additional panels to create further complexity and depth, Zac imposed strict parameters on his creative process, finding infinite possibilities within set limitations. Conflicting elements of chance and structure, movement and stillness result in works full of peaks and plateaus, structure and composure - the outcome of gambling with the dichotomy of order and chaos.

Embedded within Zac’s abstract painting practice are a diverse range of pictorial traditions and cultural experiences including graffiti, architecture, the electronic music scene, political activism and our relation to natural and urban environments. Colour and form, appropriated and deconstructed from the surrounding environment, play a key role in the aesthetics of the work.

In his latest body of work, Blue Lines, Koukoravas draws inspiration from the overtones of the night – its light, colour and atmosphere. He is drawn to the abstraction that the blanket of darkness creates as it settles on our urban environments. “Darkness equalizes everything – clearing the landscape of detail and context; filling it with the unknown where buildings become rectangular shapes and trees become amorphous masses”, he explains.
Excerpt from Blue Lines catalogue essay by Owen Craven, Melbourne-based Senior Curator with UAP 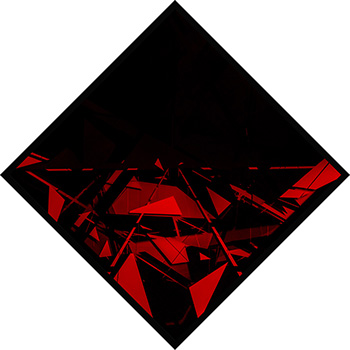