**NEWS UPDATE**
Terri Brooks will be exhibiting at the Museum Gallery Heerenveen in the Netherlands, alongside Kees de Vries and Harmen van der Tuin. The exhibition will run from the 10 July to the 22 August.

Exploring the physicality of paint and surface textures, Dr Terri Brooks formally investigates natural mark making. With a leanness of technique and an innate feeling for surface textures, Brooks utilises her materials to produce rich and complex works that speak of creating art out of something humble and ordinary. Brooks states of her practice ‘My current challenge as an artist is to make paintings via the simplest means possible. Over time the content of my works has reduced so they are now mostly constructed with fundamental elements - black, white, dot and line, horizontals and verticals.’ Her paintings arise from an intuitive, repetitive process of mark making and layering informed by observations of natural environmental processes, including weathering, ageing, and renewal, coupled with an inner quest to find new solutions and visual expressions. Architectural elements observed during her regular inner-city walks also inform the work as does a love of patterns and the Australian tradition of ‘making do’, which has fascinated her since childhood.

To paint on canvas is to engage with an inherently gridded form. Like all woven fabric, canvas is constructed from a network of perpendicular threads: warp (vertical) interlocked with weft (horizontal) in a repeating over-under pattern. Fastened around a standard rectangle, it sets the parameters of the surface: verticals and horizontals set at 90 degree angles. Binary systems. Throughout her multi-decade practice, artist Terri Brooks has used a process of intuitive layered mark-making to push these parameters apart and pull them back together, softening the grid’s hard angles into looser threads and earthy washes of colour.

Brooks studied at RMIT University and in 2010 graduated with a Doctor of Philosophy from the University of Ballarat. In 2014 Brooks exhibited in Direction Now, a major touring group exhibition first staged at Port Macquarie’s Glasshouse Regional Gallery. Direction Now responded to the Direction 1 exhibition of 1956, the first exhibition in Australia to legitimise abstraction. In 2006 she participated in a government funded artist workshop in North East Germany and in 2009 was invited to exhibit at the State Gallery of Neubrandenburg, officially opened by the Australian Embassy, Berlin.

Brooks has held over twenty five solo exhibitions and has participated in shows in public, university, commercial and artist runs spaces including art fairs nationally and in the US, UK, The Netherlands, Italy, Germany, China, New Zealand, Poland and Greece. She has been selected several times as a finalist for the Fleurieu Art Prize and the Tattersall’s Landscape Art Prize, and finalist in the Kedumba Drawing Award and Alice Prize and was awarded a BP Acquisitive Award in 1992 and an Australia Council Grant in 1991. Her work is held in the collection of the Neubrandenburg Museum, Germany and private and corporate collections around the world. For more than ten years her works have been incorporated into homes designed by leading interior designers and architects (including award winning interiors). In 2018 she completed two major commissions for the Westin, Perth and Four Points by Sheraton, Central Park, Sydney. Brooks is currently represented in Australia, the United Kingdom and China. 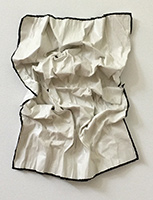