Congratulations to Kim Anderson who has been selected as a Finalist in the 2020 Wyndham Art Prize.

Close observational drawing forms the core of Kim Anderson’s practice as she explores the physical manifestations of a psyche in turmoil, and the ever-shifting relationship between our inner and outer worlds.  With a consistent tendency towards intricate detail Anderson's practice focuses on how powerful internal emotions such as grief, despair and longing can be embodied, often using elements of the external landscape as metaphors for these intense psychological states.  Much of her work involves a deeply personal psychological scrutiny in order to confront the more difficult aspects of human experience.

Long interested in the physical expression of psychological trauma, Anderson’s exploration of solastalgia—also known as ‘eco-anxiety’ and ‘ecological grief’—began with her 2018 solo exhibition To Live Alone in a World of Wounds at the Art Gallery of Ballarat. This new body of work continues and deepens her research. In Anderson’s drawings, the shape of tree limbs are subtly echoed in the gestures of the figure’s body. The dress—flouncy, ankle-length, wildly impractical—recalls the patterns of tree bark in its many folds and creases. This figure is at once out of place in the landscape, and implicitly connected to it, shadowing the trees that cling in death to the soil.
Excerpt of exhibition text by Anna Dunnill 2019

Anderson completed a Bachelor of Fine Arts (Honours) at the University of Ballarat in 2003, and in 2007 she was awarded a scholarship to study a Master of Fine Art at the University of Dundee in Scotland. In 2010 she received an ArtStart Grant from the Australia Council, and she has created and curated projects supported by Arts Victoria, the City of Melbourne, and Regional Arts Victoria. Since then she has undertaken a number of residencies around the world including an Australia Council Studio Residency at the British School in Rome, Australia House in Echigo-Tsumari, Japan, Hospitalfield House in Arbroath, Scotland, Murray’s Cottage in Hill End, the University of Tasmania, Scotch Oakburn College in Launceston and The Art Vault in Mildura. In 2016 she undertook a three-month residency at DRAWinternational in Caylus, France, which was supported by the Ian Potter Cultural Trust, the Copyright Agency Creative Industries Career Fund, and Creative Partnerships Australia. Most recently Anderson was the recipient of a three-month Jon Schueler Scholarship Artist-in-Residence at the Sabhal Mòr Ostaig, National Centre for Gaelic Language, Culture and the Arts, Isle of Skye, Scotland (2019).

She has exhibited both in Australia and abroad with solo exhibitions in Melbourne, Mildura, Bendigo, Bathurst, Ballarat, Launceston, Hobart and Japan, and has been a finalist in numerous national awards including the Wyndham Art Prize (2020), Lyn McCrea Memorial Drawing Prize (Winner of the Peoples Choice Award 2019), Paul Guest Award (2018, 2016), the Rick Amor Drawing Prize (2016), the Eureka Art Prize (2016) and the Hazelhurst Art Award (2013).

Along with more traditional works on paper, Anderson has also created ephemeral installation projects involving site-specific drawing and projection, most notably The Space Between, a visual/sound installation at the inaugural White Night Ballarat in March 2017 which subsequently travelled to the Salamanca Arts Centre in Hobart. In 2018 Anderson held a major solo exhibition To Live Alone in a World of Wounds at the Art Gallery of Ballarat as part of the Biennale of Australian Art. 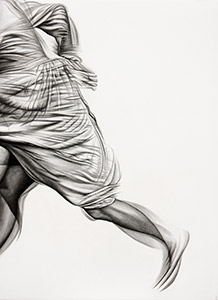