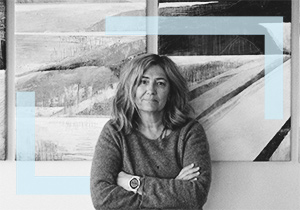 Tasmanian based painter and printmaker Caroline Rannersberger opens up new ways of seeing the landscape through an acknowledgement that, rather than there being one fixed viewpoint, landscape contains multiple and shifting points of connection across time and space.

Working predominantly on linen panels, Rannersberger’s large-scale landscapes reference both her Tasmanian surrounds and her German heritage. Caroline is an intuitive painter who directly responds to her environment, referencing the rhizomatic model of the Deleuzian philosophy and it’s potential to open up new way of ‘seeing’ paintings.

Rannersberger states that she works mostly within multiples and seriality because her view onto the land is ‘continuous’, (as it in fact always is). This approach presents the viewer with ‘place, space and sensation’ as a shifting, developing, and never fully resolved situation. The Tasmanian environment, and the view from her home on Bruny island, is always shifting due to constantly changing atmospherics and it is this dynamism which Rannersberger presents us with. These works are not depictions, they are Equivalents, more true than the literal truth, for they are true to experience, not recipe or theory. So, these are not artworks to be ‘read’, as much as experienced, and as such they merely require a willing submission to an engagement with their material presence.
Excerpt of essay by Sean Kelly 2021

I see chaos as the yearning to experience the sensation within the void, the horizon far beyond line of sight, a looming storm, the syrup of fog shrouding the water, the mountain peaks. This is a space of never-ending chaos that presents in my work as a kind of limerence; a fusion of altered states arising from an unrequited and somewhat chaotic relationship with the land. My art processes however are not simply chaotic, but rather a composition of chaos conveyed as movement in the land.
Caroline Rannersberger, Artist Statement 2021

The poetic paintings of Caroline Rannersberger distil the dualities of the natural landscape; that it is immoveable yet in flux, timeless and palpably present. Based on Tasmania’s Bruny Island, the Adelaide-born artist envisions the land as a continuum of fleeting moments across time and space. Her layered compositions chronicle the movements of ancient mountains and sublime seas as symbolic constellations of transience and permanence.
Excerpt of essay by Elli Walsh 2018

Rannersberger is the current Creative Director of the BRUNY20 Fellowship for the Arts, having held the position of Curator and Project Manager of the BRUNY18 Art Prize and the BRUNY17 Art Prize. In 2017 she was appointed to the Australia Council’s Pool of Peers Assessment Panel and in 2016 she curated Bruny Island: EDGE2 Isthmus as a part of MONA’s MOFO Festival in Hobart. In 2014 Rannersberger was curated into Hazelhurst Regional Gallery’s exhibition Sublime Point: The Landscape in Painting, which featured 25 leading painters from across the country, each exploring ideas of self and responding to historical aspects of landscape and their relationship with nature.

She has been a finalist in the Glover Prize (2016, 2013, 2011), and the Blake Prize Director's Cut (2016),  the Mosman Art Prize (2015), the Bay of Fires Art Award (2014), Hutchins Prize (2013), the Tattersalls Art Prize (2012), the City of Albany Art Prize (2011), the TogArt Contemporary Art Award, NT (2011), the Fleurieu Art Prize, the ABN Amro Award, Fremantle Print Award and the Alice Prize. She has undertaken many significant commissions for public and private institutions including for the City of Hobart, Illawarra Primary School, Kingborough Health Centre via Arts Tasmania, Zinfra Pty Ltd, City of Darwin Public Art Installation for Celebrating Darwin, Queen Elizabeth Hospital Research Foundation, Cancer and Bowel Research Trust Association and SA Ambulance. Her work is held in prominent public collections including the RACT (Royal Automobile Club Tasmania), Price Waterhouse Cooper, The National Gallery of Australia, The Museum and Art Gallery of the Northern Territory (MAGNT), and Artbank.